A Global View of Giving Trends in 2018: Who Was the Most Generous?

A Global View of Giving Trends in 2018: Who Was the Most Generous?

One way to analyze the world’s numbers in charity is the Charities Aid Foundation (CAF) World Giving Index. Yearly, it offers a glimpse into the global trends in generosity. It enables us to provide answers to questions about where people are most likely to engage in prosocial activities and to champion the growth of global giving.

The report includes questions about three different types of giving behavior, with each country ranked according to their answers to:

In its eighth edition, the CAF World Giving Index 2017 collected data from 139 countries which represents 95% of the world’s population. Below we can see the top 20 countries of the 2017 ranking:

It is not surprising anymore that Myanmar was ranked in the first place. The Southeast Asia nation has been consistently ranked at the top of the CAF World Giving Index ranking in the past four years.

According to the research, 91% of Myanmar residents gave money to charity in the past year, 53% said they had helped a stranger, and 51% claimed they had volunteered.

The results can be linked to its population’s cultural and religious beliefs; since Myanmar’s population is primarily Buddhist. Residents frequently donate to support those who live a monastic lifestyle. However, the results demonstrate how a “poor” country can be a “rich” one through its generosity, by focusing on giving rather than getting.

The 2017 Index ranks Canada 7th place. Compared to the previous years, Canada is way off the podium from its 2nd place ranking in 2013.

Analyzing the results, volunteering time and donating money have decreased over the years (both dropped 7%), bringing Canada ranks to sink as well. Below we can check the graph showing the evolution of these topics over the years. 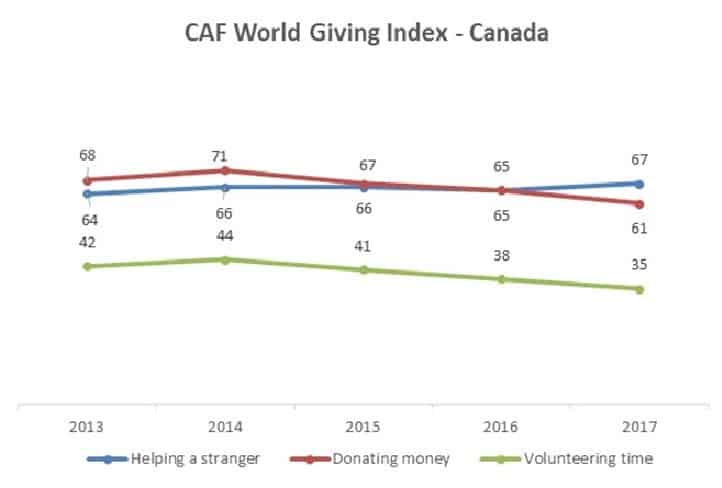 The most expressive result depicting why Canada fell off the ranks, is volunteering time. The world average result is 37% and this is the first year that Canada’s result is below the average (35%). Comparing to our neighbor U.S., Canada is 6% behind on this topic; landing in 16th place.

Additionally, the research shows that the mostly likely people to volunteer, according to the report, are men in the age of 30 to 49 years old.

Donating money to a charity is another area where Canada’s numbers have decreased over the years. Figuring in the 10th place in this matter, Canada has dropped in position over the last 3 years (where it decreased by almost 10%).

The report also shows that people from the ages over 50+ are more likely to donate money to charities compared to other age ranges, and men donates more than women overall.

This is the only subject where Canada had an improvement in the last report compared to the previous years. Compared to 2013, Canada had an increase of 3% in this matter. But, even with the rankings increasing, Canada still is not among the top 10 countries.

In addition, helping a stranger is a subject that is more likely to be performed by men (51% answered positively) and with the age range from 30-49 years old.

What this means for Canadians and Canadian non-profit organizations

These results depict a changing trend which may present a challenge for non-profit organizations, in the coming years. One of the greatest common challenges for non-profits across Canada, is securing funding and donations. With a general decline in generosity, NPOs may have greater difficulty acquiring the funds or even the volunteers that they need.

Furthermore, this means that non-profits will need to spend more or promote themselves in more creative ways. Hopefully we can, as a nation, return to our history of extensive generosity. Only time will tell.

If you are interested in the research, and would like to learn more, you can find the full discussion at the CAF World Giving Index website.

Looking to make a greater impact and and navigate the non-profit sector more effectively? Check out our other blog posts for tips, tricks, and advice!